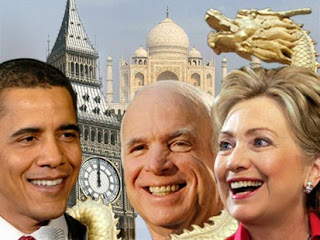 UPDATE!!!! Wow what a high turnout. We have 4 votes for Obama, and one stupid jerkface.
As predicted, Unbeatable would rather ruin the fun than pick an AVAILABLE candidate. It clearly states (although as an attorney you can always make things more clear), "If you plan on commenting without picking one, simply don't comment." And despite being used as THE example of how NOT to play, he chose to fall in line with my prediction. I bet if I asked him who he thought would win the super bowl, the Giants or the Patriots? His response would be something like, well actually the Brazilian soccer (oh sorry - football) team is the greatest sports team in the world. DAMN THOSE GRASSFASTERS - THEY'RE SO FAST!!!!!!
Just to quickly discuss Lisa's non-American status, I live in London, and my LLM program has lawyers from all over the world (with yours truly being the only American). In every single class, there are several students from each of the populated continents. In just about every political discussion I have had, (which happens each time I tell people I am American) almost everyone has an opinion of the candidates and almost everyone likes Obama. One of my friends from Canada likes Clinton, but as far as I can remember he is the only one. I wonder if her experience outside of the US is similar to mine.
"HEY BARTENDER!!! JOBU NEEDS A REFILL." ----Best line in the whole damn movie. KD gets the award for pulling the rabbit out of the hat. Nice job.
Written by Diggs

aaactually, the dutch seem to always like Clinton. The reason is usually the same: "I really want to see the Americans being led by a woman."

of course, they also dress up in blackface on St. Nicholas day here.

unfortunately, we missed zwarte piet when we went to the netherlands.