The Man and the Mustache

Up until recently, the most common google keyword search that led people to my blog was some version of "facts about hitler." Posts such as Completely Untrue Facts about Hitler, A Simple Misunderstanding, and Appeasement Please were somehow being found this way. The first few months this happened I wasn't sure whether to be happy for the traffic or disturbed by what it might imply about humanity that my fairly un-hitler-centric blog had tapped into this niche market. But alas, these days, the search terms that bring people here are things like "bananaman" and "nerd with glasses," much more apropos of the content.

While we're on the topic, Recon and I thought up this image awhile ago but I've been scared to post it because I find it hilarious. Sorry. 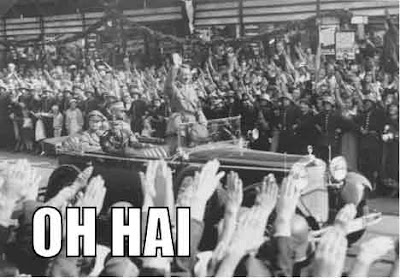 Last June, Patricia Scotland became the first black woman to be appointed to the position of attorney general in Britain. Here she is doing what no US attorney general would ever lower themself to do: 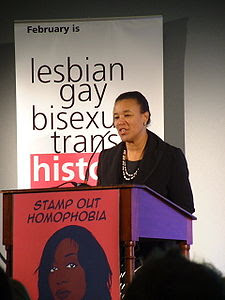 And this is where things get a little weird for me. Because Mrs. Scotland has a life peerage or something like that, she is generally referred to in the press not as Mrs. Scotland but as Lady Scotland (her full title is Baroness Scotland of Asthal). Does that strike anyone else as weird. Lady Scotland? Take this headline from the News of the World for example: 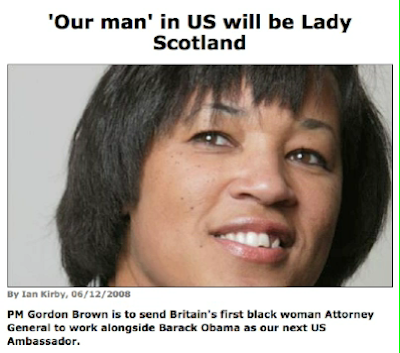 Lady Scotland is a black woman who might become Britain's man in the US? I always imagined Lady Scotland as a women of myth who rides down from the sky on a cloud carriage and gifts hungry children with hagus from her enchanted shovel.
Written by the unbeatable kid No comments:

In Argentina, passions for football can run pretty high. This is especially true for fans of the top club teams and traditional rivals, Boca Juniors and River Plate. In fact, I would recommend that any Boca Juniors fan who wants a tattoo of the Boca Juniors logo on their back should be careful to make sure that the tattoo artist is not a fan of River Plate because that tattoo artist might pretend to ink the logo and instead secretly draw a giant penis on the poor kid's back. The victim in this not exactly hypothetical case is quoted as saying, "I could not see what he was tattooing because he didn't have a mirror. I only saw it when I got home and showed it to my parents."

(story via iol)
Written by the unbeatable kid No comments:

Friend: We should go on a day trip to somewhere near DC this weekend.

S: We could go to Gettysburg. My professor went there a few weeks ago and he loved it. It's real close too. Right there in Virgina or something.

Me: Gettysburg is not in Virgina. I can't believe that you don't know where one of the most important battles in American history took place.

Everyone within earshot: Oh no you didn't! 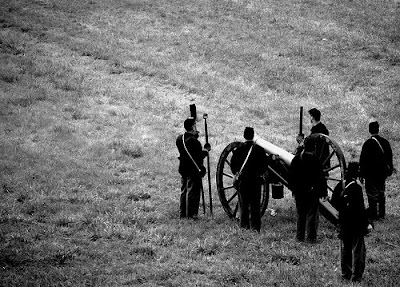 This is a little weird. If a thing has some awe, it's awesome. But, if it's full of awe, it's awful.

Just a thought.
Written by the unbeatable kid 1 comment:

Well, wing-a-ding-ding what the hell happened to me and my blog? One day I run off to India and the next we're more estranged than the original cast of Three's Company. I know that this isn't my job or anything and it certainly doesn't pay the bills but DAMN.

It's time for the third act, you know, the one where the hero gets over his own nagging self doubts, gets back to his roots and mixes some drinks epic enough to convince Elizabeth Shue to get back together with me. 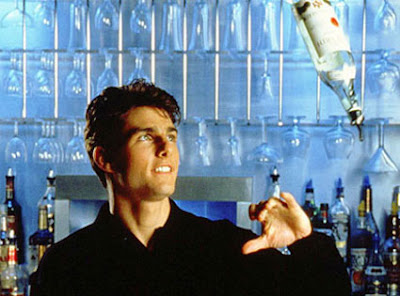 I STILL GOT IT!!!
But anyway, not too much going on over here in DC. I have an interview tomorrow and thereby a real shot at some meaningful employment. That's good. On the other hand, I did just find out that I will was not accepted into any grad schools for the second year in a row. So, sometimes you gotta take the good with the bad and write a blog about it.

P.S. How bad of a sign is it that I've begun to confuse myself with Tom Cruise?
Written by the unbeatable kid No comments: