This is pretty damn funny.

Home Movies Clip of the Day

Kid Dammit and Recon, this one's for you.
Written by the unbeatable kid 1 comment:

Hang It Up and Hang It Out

Earlier today, I made the hang up gesture and said "click" to emphasize it.

Then, I spent about ten minutes explaining to the 22 year old that I was talking about how I wasn't flashing a gang sign and how, in the old days, we had to literally hang up the phone in order to hang up the phone. 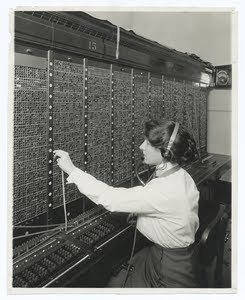 (photo via nypl)
Written by the unbeatable kid 3 comments:

In fact millions of pedestrians, standing at crosswalks, have experienced real terror, exposed as they now are to the mercy and moderation of bicycle riders, people whose lawlessness and viciousness are a matter of record...

Not only are bicycles dangerous, they are as antiquated a form of transportation as the rickshaw. In no advanced city on earth will you find civilized people cycling to work. The urban cyclist is generally a crank, either profoundly antisocial or hopelessly narcissistic and following the strenuous life in hopes of achieving immortality or a legendary sex life.

- Emmett Tyrrell Jr. in the Indianapolis Star Op Ed circa 1980
(via Andrew Leonard via Copenhagenize)
Written by the unbeatable kid No comments:

I caught a really neat post over at language log today. Turns out, the term "darkies" is not offensive to South African blacks. They often use it to refer to themselves and are not offended by it. Well, when some South African blacks started using "darkies" on twitter things got a little messy and feeling were hurt. Kinda cool how this global interweb is allowing us to learn about each other while we insult each other.

Anyway, in an earlier post, I featured a video about the black middle class. These things interest me. The stereotype of what it means to be black can easily be broken by recognizing that being black can mean so many different things.

Where I live in DC, there are a lot of east African immigrants - many 1st generation from Ethiopian, Somalia and Kenya. Their English is fine but accented and they all speak languages that I don't recognize. I am constantly fascinated watching the interactions between these people and the black people who have grown up in DC. There's a strange mix of familiarity and awkwardness through a lot of these interactions like if you met a relative from another country that you've never met before.

This is the exact reason that I don't use the term African American. This term really washes over the differences in experience between an Ethiopian immigrant from an upper middle class background whose first language Amharic and an working class American who is black. Most Americans that are "African American" have about as much to do with Africa as I do (which is to say very little). As I understand race in this country, it is not about culture or heritage or genetics it is about the color of your skin and to a much lesser extent the way you talk and the way you dress. I'm pretty sure that race is skin deep. Of course, what you do with your race, how you incorporate it into your identity is much more complex.

Think for a minute about Barack Obama. Here's a guy whose mother was a white lady from Kansas and his biological father was a black man from Kenya. He was born in Hawaii and raised in Indonesia by his mother and his step father, an Indonesian man. He went to high school in LA and college in New York City then law school in Boston and a political career in Chicago. Now, why the hell is this guy African American? Is it because his father, whom he only met once in his life was from Kenya? Yeah. That makes sense.
Written by the unbeatable kid 1 comment:

The Universe on a Snowy Day

Carl Sagan is my new hero.

Written by the unbeatable kid 2 comments: