I happened to tune into the Late Show last night to see Letterman being extraordinarily gracious to deceased comedian Bill Hicks. Totally floored me. Kudos to Dave.

For the intro and full appearance of Mary Hicks on Letterman, check out youtube clips 1, and 2.
Written by the unbeatable kid No comments:

Vietnam: Love It or Leave It

Over the past few weeks, I've been reading this really thought provoking book, "Lies My Teacher Told Me", by James Loewen. The books is a spirited discussion of the many problems with high school American History textbooks - what general themes they follow, why they occur, who is responsible for them and how they could be solved. I highly recommend it since it makes for easy and compelling reading.

Near the end of the book, Loewen presents an exercise that I wanted to duplicate here in the hopes that you, dear reader, might be inspired to participate. Here it is:

In January, 1971 the Gallup Poll asked: "A proposal has been made in Congress to require the U.S. government to bring home all U.S. troops before the end of this year. Would you like to have your congressman vote for or against this proposal?" Estimate the results, by education, by filling in this table:

My Brother Deserves a Medal

On an earlier post, I dedicated a few words to Captain Awesome himself: Mike Piazza. In that post I talked about how he was a part of my favorite moment at Shea stadium, where he hit a 2-run game winning home run in the first game back in NY after 9/11. I went to that game with 3 friends from the old Fordham U., and we all decided to put current events behind us, paint our faces with American flags and go have a great time watching Mets baseball.

During the game some reporter who claimed to be from the LA Times took our picture, but I never got to see the fruits of our labor (or at least the lady friends recruited to paint our faces). Well now thanks to my awesome brother Keith, I found out that we did make in on TV that night. So without further delay, I present my first and only appearance on a Mets Broadcast. Feel free to skip ahead, but my appearance is only 1:12 into the video, so start to pay attention at 1:11 (it is only 1min so just watch and let the drama build up for that time). Lets Go Mets!
Written by Diggs 1 comment:

Here are two quotes concerning the federal bailouts from Rep. Alan Grayson (seen below with some sweet sweet facial hair) that I found to be worthy of further thought. These are from an interview in Salon. 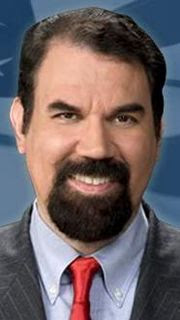 "How can anybody be other than angry to see something like this happening. If they took that same money, $4,000 for every man woman and child in American, and they simply wrote checks to people that would end forclosures, it would stop the drop in the housing market, it would put a significant dent in our unemployment problem. Instead they take that money...they lend it to people who we don't know, they get back stuff we can't understand and we're the ones left holding the bag."

Greyson's idea to "cut out the middle man" in the financial crisis is something that I've been pondering for awhile now. Banks and other financial institutions use money to make money. They give people and organizations money in form of loans and they collect a price for this service in the form of interest. Money is the product that they produce and sell. Does giving financial institutions money so that they can turn around and loan it at profit if they so choose make sense? Of course, representatives of the Fed (Federal Reserve) have been saying that they are actually loaning this money instead of merely donating it. But, this is little more than vague assurance since they refuse to disclose exactly what they're doing to anyone.

Let me put this even more simply. There is a cycle of money that is easy to follow.

Now, given the above cycle, here are the points that I find interesting. Caveat: Some of the following rehashes what I say before this update.

First, I'm still unsure to what extent the government is giving vs. lend money in phase 1. Actually, I think that this distinction has been made intentional unclear by the Fed . What I'm quite sure of is that if the money is lent to the banks it will not be returned in full and certainly not with interest.

Second, while the money is coming from the government of the United States, the distribution of this money is controlled by the Fed which is best described as a quasi-governmental institution. The Fed has members appointed by the president and confirmed by the senate but also has members and significant input from it's member banks. Again, I'm no expert on how the Fed makes decisions but I'm pretty sure that it is a hybrid institution of both the government and the banking system. These are the people that are giving/lending money to the banks.

Third, and probably most important, the banks lend money at interest. I mentioned this point in the original post but I just want to highlight it again here. Collecting interest is like skimming money off of the cycle. Or we could think of the cycle as an engine that drives profit at the banks.

Fourth, the banks have more control over lending money than any other part of the cycle. As the post illustrates, Congress is having trouble even simply accounting for how their money is spent. When people and business give their tax money to the government, their control over its distribution is limited to their ability to elect the government and advocate for its policies.

Fifth, apparently, there aren't even assurances that the money given to banks and other financial institutions is being loaned out at all. If they aren't even loaning it, God knows what they are doing with it but it's a good bet that it's something more profitable than merely loaning it out at interest.

This is how I see the state of the TARP program and the cycle of money that it generates. If anyone disagrees with my extremely simple minded analysis, I would be happy to hear alternate viewpoints.
Written by the unbeatable kid 3 comments:

While reading an article in the Wall Street Journal a few minutes ago, I got the sudden desire to try an exercise in inversion.

Armed private security companies are proliferating in Afghanistan, presenting a challenge for American forces struggling to discern the identities and loyalties of the employees.


Then, the inverted article:

U.S. military forces are proliferating in Afghanistan, presenting a challenge for Afghans struggling to discern the identities and loyalties of these foreign troops.
Written by the unbeatable kid No comments:

The Kimya Dawson 10 Years Off the Sauce Show was off the hook. A bunch of great acts and a chance to see old friends. It was great to hear songs that tell the story of people's experience of addiction and recovery. We haven't really had too much exposure to that kind of experience since the end of the "War on Drugs". 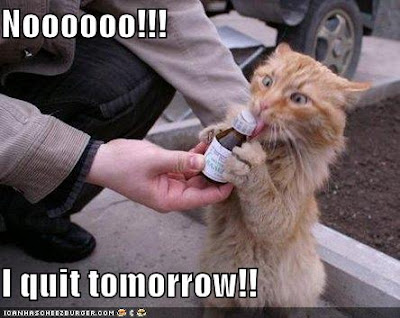 (via icanhascheezburger)
Written by the unbeatable kid 2 comments:

A line of cop cars just went by on the street outside my house. The cop cars had their lights on but no sirens. Well, one unmarked car didn't have a siren on but the cop was leaning out the window yelling "Whoa whoa whoa!"
Written by the unbeatable kid No comments: