Someone uploaded "Uncounted" to google video recently. I'll just post it here without comment because I would rather that people who are interested have the chance to watch it unframed by my opinions.

I want to mention something about conspiracy. No one has yet explained to my satisfaction the difference between a conspiracy and a long range business plan.
-Teresa Hommel

I'm coming at this as an accountant and an auditor. Why would you make a machine that doesn't provide a paper trail and can't be audited?
-Athan Gibbs

Here's a more complete version of the Princeton study:

I really can't stop myself, can I? It's the whole Curtis testimony.

I'm working on this script for a political thriller. Here's an excerpt:

We join our hero weeks before the November election. The rigors of the campaign weigh heavily on his face as he is wrapping up a difficult press conference. He wipes the sweat from his brow and points to a reporter in the front row.

Senator Obama, we've been circling this issue again and again. Do you really expect to compete in this election, trailing in the polls as much as you are? Why don't you just give up now?

Upon hearing the question, Obama's demeanor changes completely. He appears energised by some hidden force deep within his own psyche.

First, let me ask you a question. Ever played roulette?

Well, let me give you a word of advice. Always bet on half black!

Barak leaps from the podium and punches the reporter directly in his fucking face. There's a flurry of fists and a whirlwind of action with the bodies of reporters flying from the melee like so many rag dolls. Obama emerges from the fray, rallies his base, figures out where McCain is holding the kidnapped Michelle, rescues her and goes on to win the election.

This thing writes itself.

UPDATE!
As I originally wrote this joke, the climatic line reads. "Always bet on half white, half black." I thought that betting on black and white at the same time would almost guarantee victory. Yet, as KD quickly pointed out in the comments, roulette wheels actually have black and red pockets not black and white pockets. Obviously, I don't play roulette, even on occasion.

Leave it to me to spend an inordinate amount of time developing a luke warm joke that doesn't even make sense. Incompetence - 1, Theunbeatablekid - 0.

So, with that in mind, I've adjusted the joke. In parting, let me leave you with this piece of advise: Always bet on Kid Dammit!
Written by the unbeatable kid 2 comments:

This isn't the first time that I've blogged about "Creature Comforts" but as long as there's more slack jawed rambling I'll keep coming back for more.

I like everything that Nick Park has ever done. S gave me "The Curse of the Were-Rabbit" for my birthday and I must have watched that thing 8 or 9 times.
Written by the unbeatable kid 1 comment: 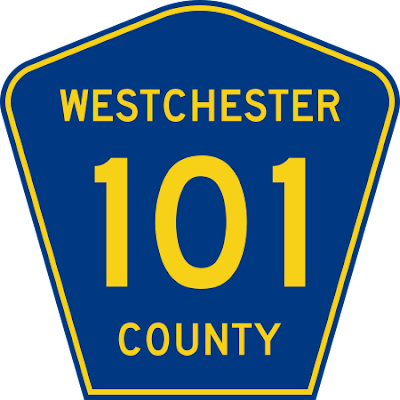 A few days ago I stumbled on a great way to test whether someone is a true Westchestarian or not.

I got to talking about the WC* the other day with a coworker of mine from Yorktown. During the conversation, I implied that Westchester is not to much different for Jersey. She immediately launched into a 10 point dissertation "defending" her home state from any similarity with the Garden State.

That, my friends, is more proof than a birth certificate.

---------
*We should totally get our own TV show documenting the lame self absorbed lives of the people of the WC.**
**Yes, I know what you British people are thinking.
Written by the unbeatable kid 1 comment:

This clip does a great job of satirizing the appallingly poor level of debate around universal health care in the US.

(via the onion)
Written by the unbeatable kid No comments:

Quote of the Day

Former US Attorney David Iglesias brought his nerd game to The Daily Show the other day. Iglesias was one of the US attorneys that was appointed by the Bush administration then later fired for not pursuing politically motivated cases.


Stewart: Is the greatest disappointment for you that you were a guy who believed in what they're doing...do you feel betrayed?

In Honor of Vincent

This evening our cat, Vincent Oxford Marchmiddle III, passed away peacefully. He was a great cat and because the internet is the most natural place to have a memorial service for him, I dedicate this post to his memory. 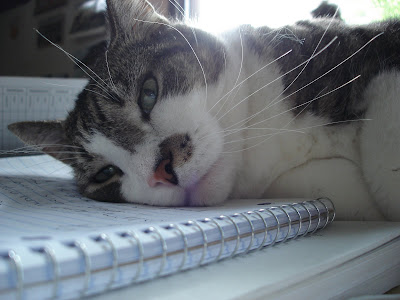 In the future, I will be adding some stories about him but for now I don't feel up to it and will post only a photo and a video. Suffice it to say, he had a lot of personality even for a cat.

Written by the unbeatable kid 5 comments:

I only put this Daily Show clip up because my brother Diggs and I were talking about this exact issue the other day.

Due to some issues with Dailyshow.com video embedding, I'll link to the video instead.

Lesbians kiss at a Mariner's game? The interweb used to spread gossip? French spiderman climbs the New York Times building? That is some Bush league bullshit.
Written by the unbeatable kid 2 comments:

I've been trying to catch Euro '08 games on ESPN classic and the first great game has to be Netherlands V. Italy.

No great game is complete without a bit of controversy. The BBC has a run down on the issues are surrounding Van Nistelrooy's opening goal.

The following two goals didn't have any taint of controversy. The Dutch beat the Italians at their own game - the rapid counter attack.

The teams I would like to see go all the way are Spain and the Netherlands.
Written by the unbeatable kid 2 comments:

Euro '08 is underway for you football fans out there. In honor of the tournament, I'm posting this neat clip of teamwork goals.

The double give and go at 2:52 is particularly sweet.
Written by the unbeatable kid 1 comment:

A hundred years ago, there were two versions of Mother's Day in practice in the US. One was the child of Julia Ward Howe and was celebrated on June 2nd. The other was brought into being by Anna Jarvis and the May 9th holiday eventually morphed into the second May Sunday holiday that is currently known and loved. What fascinates me about these holiday precursors was that they were originally designed not to sell cards, candy and flowers but to promote social and political activism by advocating for progressive issues such as health care, sanitation, anti-war sentiments, and worker's safety.

So, in the spirit of the original Mother's Day and my own mother, I present to you the Mother's Day Proclamation by Julia Ward Howe:

Arise, then, women of this day!
Arise, all women who have hearts,
Whether our baptism be of water or of tears!

Say firmly:
"We will not have great questions decided by irrelevant agencies,
Our husbands will not come to us, reeking with carnage, for caresses and applause.
Our sons shall not be taken from us to unlearn
All that we have been able to teach them of charity, mercy and patience.
We, the women of one country, will be too tender of those of another country
To allow our sons to be trained to injure theirs."

From the bosom of the devastated Earth a voice goes up with our own.
It says: "Disarm! Disarm! The sword of murder is not the balance of justice."
Blood does not wipe out dishonor, nor violence indicate possession.
As men have often forsaken the plough and the anvil at the summons of war,
Let women now leave all that may be left of home for a great and earnest day of counsel.

Let them meet first, as women, to bewail and commemorate the dead.
Let them solemnly take counsel with each other as to the means
Whereby the great human family can live in peace,
Each bearing after his own time the sacred impress, not of Caesar,
But of God.

In the name of womanhood and humanity, I earnestly ask
That a general congress of women without limit of nationality
May be appointed and held at someplace deemed most convenient
And at the earliest period consistent with its objects,
To promote the alliance of the different nationalities,
The amicable settlement of international questions,
The great and general interests of peace.