Not that I've exactly been the Carl Ripkin Jr. of blogs lately but I'm on my way to India for 2 weeks. See you on the other side suckers. 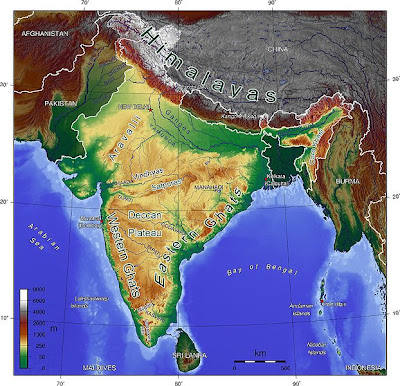 Written by the unbeatable kid 4 comments:

Vietnam: Love It or Leave It - Part II

A retreat of the US from Vietnam would be a Communist victory of massive proportions and would lead to World War Three.
- Richard Nixon
Written by the unbeatable kid No comments:

Not the least surprising feature of this economic system was that if functioned without money. True, the lack of currency did not surprise the Spanish invaders -- much of Europe did without money until the eighteenth century. But, the Inka did not even have markets. Economists would predict that this nonmarket economy -- vertical socialism it has been called--would produce gross inefficiencies. These surely occurred, but the errors were of surplus, not want. The Spanish invaders were stunned to find warehouses overflowing with untouched cloth and supplies. But to the Inka the brimming coffers signified prestige and plenty; It was all part of the plan. Most important, Tawantinsuyu "managed to irradicate hunger," the Peruvian novelist Mario Varsa Llosa noted.
- From 1491 by Charles Mann (p. 81)
Written by the unbeatable kid No comments:

She Works Hard for the Money

More good news about the current economic catastrophe! It's balancing out the jobs to gender ratio. 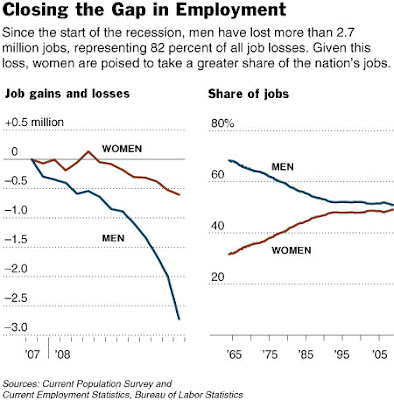 The image on the right is a little deceptive seeing as it shows the share of jobs spanning the years 1965 to 2008 with most of the changes occurring between 1965 and 1990.

Putting all this "good news" about the financial mess on my blog is making me feel like a pundit on FOX.

And all you feminists out there will be happy to note that the incoming congress (the one-happy 111th) has more women than any other in history. With 17 senators (17%) and 75 congresswomen (17%) couple with the massive power that is wielded by the modern congress, we are basically living in a matriarchy.

(via NYT and sociological images)
Written by the unbeatable kid No comments: