Neatorama recently posted some interesting facts about the great dictator and epitome of evil. Thus, I've been inspired to post my own "facts" (please note that the following facts are true only in spirit and in no way originate in reality): 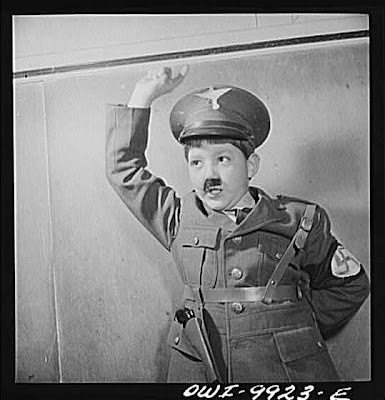 - Hitler often wore the most ridiculous shoes he could find so that when other people stooped to get a closer look he could kick them square in the face.

- Hitler's knowledge of when to hold them and when to fold them was the little known inspiration for the Kenny Rodgers aural masterpiece.

- Hitler loved dancing to his favorite polka bands at the local beer hall. It was one of the few times that he felt he could drop his inhibitions and dance like no one was watching. Also, if he caught anyone actually watching they would be killed.

- Hitler originally proposed the invasion of Poland as a joke to keep office morale high but when his fellow Nazis seemed to take the idea seriously he scratched his head and thought that there might be something to the whole invasion of Poland thing.

- In the early days, whenever he rode the bus, Hitler would pretend to be reading a copy of Mien Kampf and laugh inappropriately loudly as a form of guerrilla marketing.

- Hitler was well known in Vienna as a virtuoso flutist. But he never played. Not after the "accident".

- In 1934, Hitler published several romance novels under the name Brigette McBoyboi. The most famous of these was "Chained to the Forecastle", a sleazy thriller about how a male slave and a female slave ship captain fan the flames of a forbidden love as they troll the coast of West Africa always one step ahead of the British Navy.

Please, submit your own completely untrue facts about Hitler in the comments.

("Third-grade pupil acting the part of Hitler in a program produced by his class." by Marjory Collins via American Memory)
Written by the unbeatable kid

Well! Hitler also loved to wear his girlfriend's clothes. Like the dress she wore for their wedding? Yeah hitler wore the crap out of that dress!

I heard that if Hitler ever saw someone wearing a piece of clothing that he liked, he would ask to borrow it and then never return it. The worst part was that after Hitler killed himself my Grandfather didn't even want his scarf back.