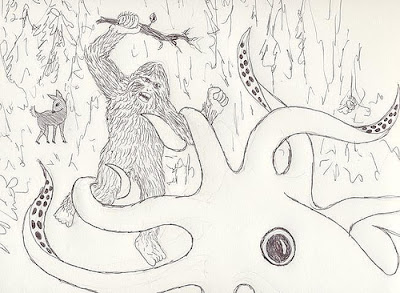 Since the announcement that a team of researchers will attempt to find Bigfoot in the expanses of my current home state, Michigan, I've constructed my own wish list team of experts. A Bigfoot "Dream Team" if you will. And they are:

UPDATE! - As per the first comment, I've modified the original team to make a no white all black team.

I see two teams one with Ice-Cube (a la Anaconda) the other with LL (a la that smart shark movie) and the rest would be a bunch of white people I have never heard of.

somehow i like the second team a lot better, but dont you need a street smart jewish guy on that team, or something?

street smart, jewish and black? if only sammy davis jr was still alive.

My dream team of all black Bigfoot busting brothers would be:
Shawn and Marlon Wayans (the 21st century Amos and Andy)
John "Pops" Witherspoon (Macaroni)
Winston Steadmore (busting expert)
Steven Hawkings (in blackface in a Hummer wheelchair with spinning rims)
The Harlem Globetrotters (Curly Neal era)
Yes indeed and then I would do the Triple Lindy into an active cartoon volcano.
-kd

No, not Ernie Hudson. The fictional character, Winston Steadmore.
-kd