Future Days of the Past

I admit that when I was in middle school I used to play this great game, "Where in Time is Carmen Sandiego?". The game was later turned into a kid's tv game show featuring the vocal talents of Rockapella. Ah, the halcyon days of nerdery. 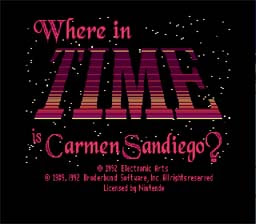 There is one thing about the game that bothered me though. In the intro, the game referred to the year 1990 by which point time travel will be used to commit and solve crimes. The game was created in 1989 and by the time I started playing it '90 had come and gone. Every time I played, my still forming brain was dumbfounded how far off these people's predictions were about the future.

Turns out that this is a common mistake in the world of future prediction. Images of the future often diverge enormously from where the actual future turns out to be (Recon has beaten me to the punch with some 1900 postcards of 2000). The speed of progress can be easily overestimated. For futurists, time travel, growing human organs and robot butlers always seem to be just around the corner. Fictional series from Buck Rogers to Star Trek jump this gun again and again.

You can watch the entire movie on youtube. It's worth every penny that you don't have to pay. Rating $3.

(Picture via consoleclassix)
Written by the unbeatable kid

It's so good the movie makes the real life future so incredibly disappointing.

i know that it's depressing but don't do it, recon. don't throw your life away by walking over to a window and then nonchalantly jumping to your doom.