The guy who revitilized the Mets organization and my love for Mets baseball retired today. Mike Piazza hung up the catchers gear for good after 16 amazing years. This guy should go down as the greatest right handed hitter of his era, and easily the greatest hitting catcher of all time.
If you simply look at the numbers, Mike Piazza is a sure fire, first ballot, hall of famer. His stats compare to the likes of Joe Dimaggio. Piazza had a career .308avg with 427hrs (most of any catcher) and 1,335rbi. Dimaggio had a career .325avg with 361hrs and 1,537rbi.
But outside the numbers, Piazza was the true leader of a Mets team that brought basball back to Queens. After years of highly paid underacheivers who were past their prime, Piazza came in and took over New York. The entire line-up revolved around him. In fact, I remember watching games with my brothers and we would be happy when a Met got out because that meant we were one player closer to Mike Piazza being up.
Although his 2000 Mets didn't win the world series that team had no business being in it. Without Piazza that team had zero 0ffense outside of Edgardo Alfonso. We had an outfield of Timo Perez (currently playing minor league baseball), Jay Payton (on his very best day he was just below average), and Benny Agbayani (in 2002 he went to Japan). Nuff said.
My favorite Piazza memory was a game I went to at Shea. It was the first home game after 9/11 and the Mets had come out of nowhere to compete for the division. The Mets were down 2-1 to the Braves in the bottom of the 8th. Piazza came out of the on-deck circle and everyone in the Stadium went nuts. He promptly hit a 2-run game winning shot and the stadium was so loud I swear the ground was shaking. For 5 minutes it was nice to forget about the tragedy in NY and escape into my love for baseball.

Other great Piazza moments include: Piazza charging the mound after Mota hit him with a pitch and watching Mota literally throw his mit at Piazza and then run for his own dugout. Thanks unbeatable. Hopefully Mike will continue to be involved in the Mets organization in some capacity. THANK YOU CAPTAIN AWESOME!!!!!!!!!!! 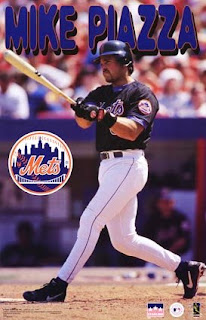 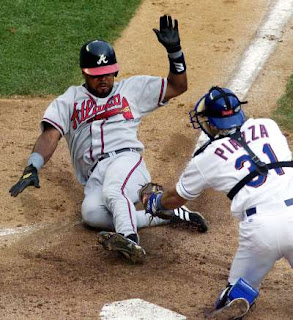 via catcher photos
Written by Diggs

After watching that video for the first time since the incident happened I am disgusted that the Mets signed Mota after Piazza left to play for San Diego. I don't care how good they thought Mota was (and he turned out to cost the Mets the playoffs in 2006), Mota should never have been on that team. PIAZZA rules!!!

As per my earlier suggestion of brining Piazza back, I say fire Randolf, and hire Ho-Jo to manage the Mets. Then hire Piazza to work as hitting coach, and eventually let him manage the team.

piazza should be the hustling coach for obvious reasons