American politics these days is less than 1 dimensional; it's binary. Are you a liberal or conservative? Those are the only options. But, as anyone who has discussed political and social issues for more than five minutes knows, the full palate of opinions that people can have about an issue cannot be forced into one of two camps.

Some libertarians have developed a two-dimensional chart that effectively expands how to think about where you stand in the political landscape. It's called the Nolan chart. I've including some links to various tests to place yourself on the Nolan Chart.

And here's a decent explanation of how the Nolan Chart works with different issues. And here I am on the chart with some famous people. The blue dot exactly opposite George W. Bush is me. 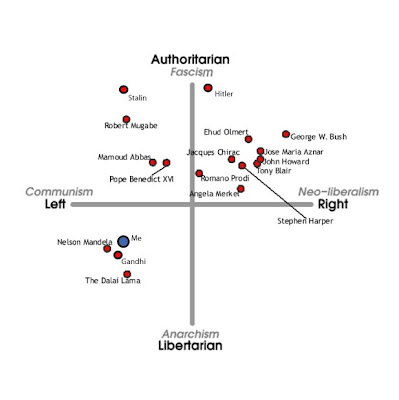 SEMI-IMPORTANT NOTE! Some of of these sites invert the y-axis so that Anarchism is at the top and Authoritarianism is at the bottom. You should take this into account if you compare your results to my chart above.
Written by the unbeatable kid

I should drink mountain dew, I'm so EXTREME!

Typical Diggs, all by himself in the bottom right. The the stupid Dalai Lama isn't even interested.

There is something uniquely american about the lower right quadrant. you share it with the likes of william f buckley and barry goldwater.

Hey, I can't view your site properly within Opera, I actually hope you look into fixing this.