The other day, someone asked me if I though that a certain disease was essentially a mental or physical problem. My knee-jerk response was "What's the difference?"

I didn't mean that question rhetorically either. It may be that the years of practicing Chinese Medicine have confused me but I'm having trouble distinguishing what should be considered essentially mental verses physical. In the Chinese medical system that I use, your mind and your body are two aspects of the whole being that is you. Distinctions between the two are generally academic. But, in Western philosophy, the mind and the body are distinct objects that can only interact in very specific ways if at all and the distinction is all important for treatment. 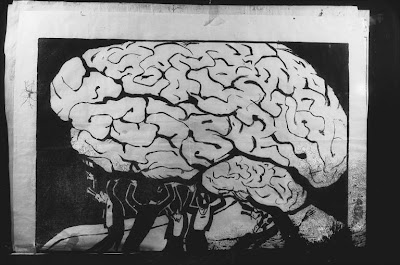 The thing that confuses me is that the boundary between what is considered the mind and body keeps shifting. Like in WWI, you climb out of your trench one day to find that you're on the wrong side of no-mans land. One interesting thing about the boundary is that the mind side has been losing ground for hundreds of years now. First, the entire world is a conscious entity governed by God, then it's just the animals, then just us, then just our brains, etc.

To suggest that criminals could be excused because their brains made them do it seems to imply that anyone whose brain has a physicological change could be absolved of responsibility for their actions. You get a system that is one small step away from saying, "It's not my fault. I made me do it." The human being becomes just a helpless theme park goer strapped in for the ride of life. I am no longer the captain of my destiny and my decisions but merely the captain of my own roller coaster ride.

Certainly there are many circumstances where people due to the influence of chemicals, drugs, or mental disorders do things that they wouldn't ordinarily do. I'm not trying to deny this reality at all. But, there are many forms of evidence that can be used other that investigation of the physical brain that can determine this. One need not look any farther than the correlation between lower back pain and MRI results showing disc herniation to find that diagnostic tests are often misleading compared to subjective reports. 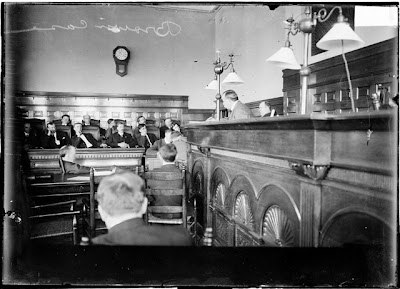 My biggest problem with this kind of science in the courtroom is that science as a whole has nothing to say about the nature of thought, morality and justice. These are concepts foreign to the very nature of science. Asking for a scientific explanation of society and consciousness is like asking a vegetarian to cook a steak for dinner; It's bound to be an unpleasant experience for all.

(Poster of a giant brain for La GHEBIA 1919. via The Beinecke Library. Image of Lee O'Neil Browne in court 1910 by a Chicago Daily News photographer via American Memory)
Written by the unbeatable kid