The reign of the hippies is almost at an end.

Yup, the generation of baby boomers which have been firmly in control of government and business in the United States for the past ten years or so is almost over. Hooray. I for one have had enough of there pro-drug legislation, anti-business and corporate agenda, the loose sexual morals they promote, their absolute aversion to war of a any kind and their devotion of so much of the nations resources to fulfilling the dream of civil rights.

Ah, sarcasm, my old friend. Where would we be without you.

Seriously, people tend to think of 60's counterculture as infusing all the youth of the era. So, how did we end up with a large group of people from that era in positions of authority who have white hot button down white picket fence conforming values? First, you have to realize that as evidenced by the name, counterculture was never mainstream culture. Therefore, one would not expect to see it well represented in the majority of people of that time. While some significant social changes happened in the sixties, it was a really a revolution in perception (hyped by mainstream culture to mobilize the silent majority) more than anything else. 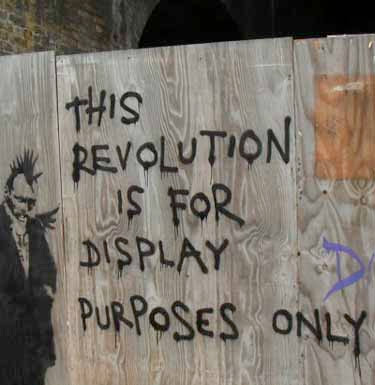 Another interesting thing to note is that as society was moving left, the economy was moving right. The sixties marked a move away from strong unions and a prevalence of unskilled labor jobs. Small businesses were evaporating to be replaced by large corporations created in mergers. The seeds of a culture of consumption where starting to sprout.

(graffiti via Banksy)
Written by the unbeatable kid