Blood of the Innocent

If you haven't figured it out by now, I'm a regular reader of Glen Greenwald's blog. In some recent posts he anaylized two polls from the Program on International Policy Attitude at the University of Maryland that asked to what extent violence against civilians is acceptable amoung the populations of different countries. You can go to the link above to download a pdf of the report. The results would probably suprise most people but certainly didn't suprise me; Americans were at least twice as likely to support attacks on civilians in order to acheive political goals as any of the prodominantly Muslim countries included (Iran, Pakistan, Morocco, Egypt, and Indonisia).

Just look at a comparison of views held by citizens of the United States verses those held by people in Iran (considered by many Americans to be among the most extreme fundamentalist Islamic countries). When asked about attacks on civilians to achieve political goals, 11% of Iranians felt that such actions would be justified at least some of the time while 24% of Americans felt the same way. On the flip side, 46% of Americans think political attacks on civilians are never acceptable compared with 80% of Iranians. 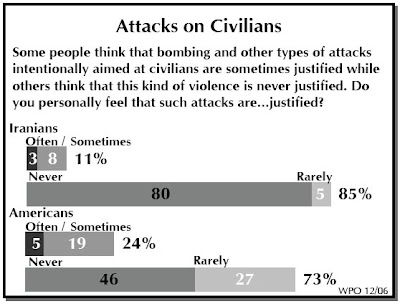 US political rhetoric and mainstream media would imagine these findings the opposit of expectations. It turns out that their rightousness isn't quite as justified as it could be. The irony is that (as is explained this book I keep bringing up, The Authoritrians) the morally rightous are more willing to commit immoral acts. These polls didn't include other countries but it wouldn't be surprising to see the US way close to the top of countries willing to kill civilians for political goals. We certainly beat the crap out of Iran.