Increasingly, American culture is being designed from the top down. Maybe, this is a simple result of the US losing manufacturing jobs and moving into the so-called idea economy or maybe not. Either way, we've certainly put those factories to good use making popular music, art for advertising, and blockbuster movies. Plenty of the bottom up culture still exists but good luck finding it.

That's one of the reasons that I've been so enthralled last few weeks by snippets of Honk Horn Music of Ghana. This is music created Ghanian truck drivers and features vocals, horns, and various metallic percussive instruments. The phenomenon has been followed recently by Steven Feld who has done a few years of field work recording this music at gatherings of drivers and especially at funerals. 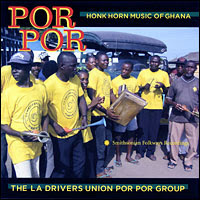 How awesome is it that the musicians are truck drivers. I love it. The music itself is a mix of west african style with influence from american jazz. You can hear exerpts of it from an npr story and see some video at a smithsonian site. There are a lot of really cool aspects to this music but one of my favorites has to be the pump song and dance. The song supposedly has its origins in the days when drivers had to deliver supplies deep into the forest. When they would get a flat, they would quickly run out of the truck and pump up the tire while a friend would bang on anything around to keep wild animals away (Nothing scares away cougars, anacondas and saber-toothed elephants like banging on a truck). Eventually, this ritual turned in to a song and dance with distinctive pumping action. 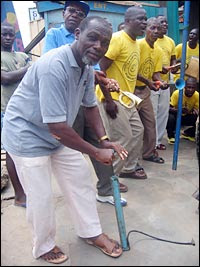 The US, on the other hand, has a truck driving culture that can only be expressed through a song so rockin' that it was turned into a movie.

CONVOY!
Thanks to Kid Dammit for pointing the way to this masterpiece demonstrating the ability of Hollywood to process trucker culture into fine goo. It actually is a decent movie. I particularly appreciate Ernest Borgnine and a plot that makes absolutely no sense (most likely because they had to make it fit with the song). So, here's the ending of the film with plenty of spoilers and if you just want the song skip ahead to 1:56.