I was in the Laundromat the other day and the tv got me to thinking.

Most people these days recognize Hugh Laurie as the surly doctor on that biomedical propaganda machine of a show called "House" and while I'm fairly satisfied that he's getting his due as an actor, I'm a bit despondent that his earlier work as a comedian hasn't seemed to been pulled into the spot light with him. How funny was Laurie? I submit Exhibit B: 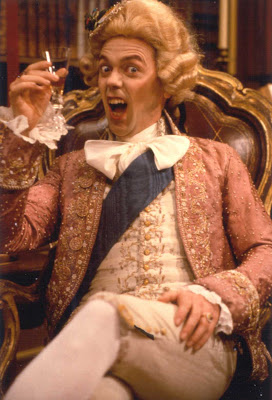 As many of you probably know, Laurie's mastery of physical comedy and blustery dialogue made him the first choice for playing dim-witted and excessively cheerful english gentleman in some of the most hilarious english comedies of all time. I don't believe that the world will ever see a better Bertram Wooster. If you haven't had a chance to check any of his early work, use the internets.

Blackadder (Recommended: Duel and Duality and Major Star)
Jeeves and Wooster (only one episode here)
A Bit of Fry and Laurie (also just a few episodes)

If anyone has any better links for these shows, please let me know; And dear god stop watching "House."

Absolutely. I saw a bit of "House" while flipping through the channels on the ol' hotel cable recently. My god. I was astounded. Hugh Laurie is getting all this acclaim for _this_? It's crap. Why, he isn't goofy at all. He was just some obnoxious asshole with a limp, engaging in dull sitcom,M.D. dialogue. Damn you hotel cable, damn you.

That "rotten burrough" bit is one of my favorites from that season. I almost think that his whole chicken clucking thing and subsequent dialog was pure improv. I mean, how could someone possibly script that and know it'd be really funny? Maybe it's just me...