There are other places besides Brazil that make football great.

Take the international makeup of Chelsea for example. Chelsea is a team with a fine English pedigree starting with it's formation in 1905. It has a Portuguese coach and is owned by a Russian. The team itself has a core of great English players but also includes strong players from the Czech Republic, France, Germany, Portugal, Ukraine, the Netherlands, Ivory Coast, and Ghana. Also on the squad, but not as dominant on the field are players from Israel, Italy, Sweden, Cameroon, and Nigeria. Notably absent since the departure of Hernan Crespo are the South Americans. But a globetrotting squad nonetheless. 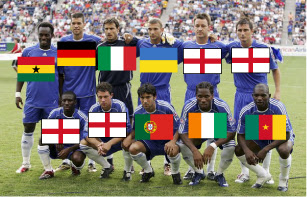 Another great thing about Chelsea is that the team is as successful as it is diverse. Just this weekend they defeated Blackburn Rovers and move on to face Manchester United in the FA Cup final. Since the League Cup is already under their belt and they have high standing in both the premier and champions leagues, they are in contention for a hitherto unheard of quad (the treble having only been accomplished once before by Ajax Amsterdam).

Chelsea is far from the only international team these days though. I picked it in particular because it happens to be one of the more successful ones. In European club football, this tends to be the norm. I myself happen to be a big fan of Arsenal.
Written by the unbeatable kid