In January 1987 viewers in India began to tune in each Sunday morning for a Hindi television serial based on the Ramayana story. Observers estimate that over eighty million people watched the weekly broadcasts...Despite the fact that Doordarshan, the government run network, had only contracted with the producer for a year's worth of episodes, the audience demanded more. In fact, sanitation workers in Jalandhar went on strike because the serial was due to end without depicting the events of the seventh, and final book of the Ramayana. The strike spread among sanitation workers in many major cities in North India, compelling the government to sponsor the desired episodes to prevent a major health hazard. Quite apart from such militant enthusiasm, the manner in which viewers watched the serial was also striking. Many people responded to the image of Rama on the television screen as if it were an icon in a temple. They bathed before watching, garlanded the set like a shrine and considered the viewing of Rama to be a religious experience.

From Many Ramayanas by Paula Richman 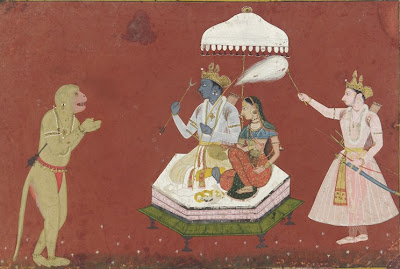 (image from wikipedia: A 17th century painting depicting Hanuman worshiping Lord Rama and his wife Sita. Lakshmana is also seen in this painting from Smithsonian Institution collection.)
Written by the unbeatable kid