The Pope is Awesome 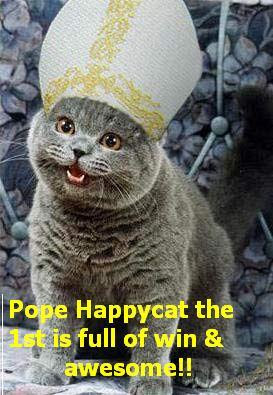 There's nothing like a visit from his holiness, the pope, to kick off spring. As a once kind of catholic myself, I've always enjoyed the rare opportunities we get to follow the pontiff's zany travails as he wanders across this great land from New York to DC. Yes, far and wide.

But don't you dare think for a second that being the pope is easy. No, heavy is the head that wears the giant ridiculous pope hat. For example, if you were the pope and Bush threw a big birthday party in your honor, would you
a) go but pretend not to be having fun
b) go late and get so smashed that a cardinal has to drive you back to the hotel in the pope mobile
c) go early so that you have plenty of time to make creepy pope eyes at Jenna and Barbara
d) totally not go at all because you heard that Bennigan's gives out free ice cream and sings you a snappy birthday song.

The correct answer is d. Bush, even as the president of the most powerful country in the world, you just got stood up. Yes, it's true and you can read about it at the end of this article.

I was also excited to hear Pope Benedict import his favorite oxymoron to the new world - The Dictatorship of Relativism. Seriously, could you come up with a more nonsensical way of shaking your fist at young people and their confounded modern ways? What's next, The Tyranny of Tolerance?

(Happy Cat Pope via neutralzonetrap)
Written by the unbeatable kid

Labels: pope is in your business