Not Quite Supreme Enough

The president of Iran, Mahmoud Ahmadinejad, has been visiting the US this week and he's really getting the red carpet treatment from the press and local politicians. For example, the president of Columbia, Lee Bollinger, acting as host to the Iranian welcomed the him to speak by calling him a "petty and cruel dictator" to his face. You'd think that a guy could find a little more love than that for a fellow president but I guess the anti-Ahmadinejad band wagon is so roomy and comfortable that no member of the established class can resist.

Now, let me make perfectly clear that I'm not exactly in the pro-Ahmadinejad tent but I do likes to calls um like I sees um. So, what's wrong with using the term "petty and cruel dictator"?

First of all, the position of president of Iran is elected. In order to say that Ahmadinejad is a dictator, you must be convinced that there was significant election fraud or some other formal electoral mechanism such as a one party system in order to cry dictator. While there was some controversy in the 2005 Iranian presidential election, it was about the same level or less than was seen in the last two US elections. There's a saying about glass houses that applies in this instance. The evidence as I see it says that Ahmadinejad had enough popular support to win the last election and could conceivably lose the next election if that support dries up. Dictators do not lose elections almost by definition.

Second, presidents of Iran are term limited to two years and there's no indication that Ahmadinejad has any plans to ignore those limits. No Iran president has thus far served more than two terms.

Forth, Iran has a functioning legislative branch of government not beholden to the president. Again, proper dictators don't require the approval of elected officials to pass laws.

Fifth, the president of Iran does not have any control of the army. That is the province of the "Supreme Leader".

Sixth, there is a Supreme Leader of Iran who is unelected, generally rules for life, has near dictatorial powers, controls the army, "formalizes" elections, and is called the SUPREME LEADER! The current supreme leader is Grand Ayatollah Ali Khamenei. If Iran is a dictatorship then Khamenei is the dictator not Ahmadinejad. As a general rule, dictators do not answer to even more powerful political entities in their own country. Of all of these points, this one should be the biggest smack in the face to anyone who clings to the failed notion that Ahmadinejad is some kind of Stalin or Franco of Iran.

In summation, Ahmadinejad is functionally the Iranian equivalent of Condi Rice. And like Condi, one can hold him responsible for developing and acquiescing to a lot of his governments more foolish policies but he is no more a dictator than she. They are further alike in that their main function is to get sent to other countries, to say ridiculous things, to get laughed at, and to get protested. That's both of their jobs in a nutshell. An Iranian scholar claiming that Condi was a petty dictator would only reveal his own confusion and ignorance. 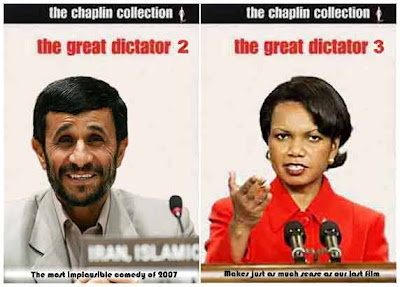 So, since Americans are completely ignorant of how the Iranian government works, the president of a well respected American University can display incredible ignorance of a political lightning rod of a guest and not get laughed off the stage.

Notice that I'm not saying that Ahmadinejad is not entirely blameless for the policies of his country (I think that I stuck that triple negative but was it enough to impress the Russian judge?). He's plenty responsible for accepting and promoting these policies. He just not any kind of dictator.

UPDATE: The media's whipped people into a frenzy enough that this was heard by a caller to the NPR show "On Point" - I'm going to be honest with you. I know that I'm from the South and everything but I wouldn't care if somebody put a cross hair on [Ahmadinejad] and put him out.

Yup. Time to lynch some foreign statesmen. The history lesson for today should be that those things don't always work out as planned.
Written by the unbeatable kid