Now, its time to return to every one's favorite ongoing program, The Metaphysical Foundations of Modern Science, and the grand personage of Johannes Kepler. Kepler is mainly known to students of science as the man who made a profound discovery of the 3 laws of planetary motion. These laws dovetailed nicely with Galileo's work to establish a scientific world view which features mathematics as the essential language of reality.

But, Kepler's brilliant mind found no contradictions between science and mysticism. Indeed, he would place the line distinguishing the two in a very different place than we with our modern minds would. For example, he stood adamantly behind Copernicus's heliocentric theory partly was because he considered the sun as a symbol of God the father with the stars as representing the son. The space between would therefore be the holy spirit and we on earth subject to all three forces. All things rightly revolve around God the father and thus it is perfectly natural that the earth goes round the sun. Kepler also practiced astrology extensively and he intermingled the astrological and astronomical aspects of his findings in most of his books.

And of course, the theory that Kepler considered his masterwork is discarded as a strange artifact of the medieval world view by modern scientists. His masterwork idea came to him in the middle of a lecture on geometry (Kepler was a university professor at the age of 23) when he suddenly realized that there was a similarity between the distances from the planets to the sun and the platonic solids. The distances between the planets and the sun are such that their orbits could inscribe and circumscribe the five platonic solids. The six planet orbits fit inside and outside the solids if you order them correctly. The two dimensional version of what I'm talking about might look like this diagram with the orbits in red inscribing and circumscribing the regular shapes in blue. 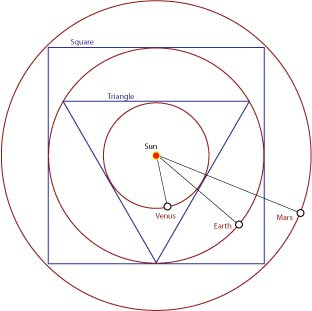 Things are bit different in three dimensions but they also add to Kepler's argument. There are only 5 possible platonic solids. Kepler reasoned that this is way there where only 6 planets. The whole thing fit together in a nice package. Here's a diagram from Kepler's book to show what the three dimensional version would look like. 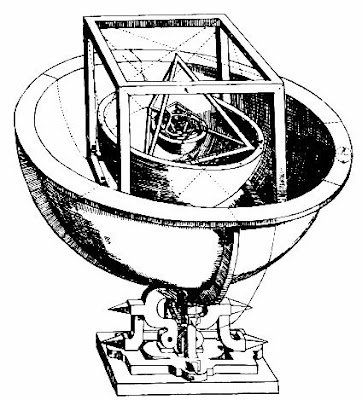 Much of the work that Kepler did on his laws, which receive such scientific renown today, was done in order to make this ordered structure of the solar system take shape.
Written by the unbeatable kid