Here's a recent article on sexual differences and wages. Every year, a study like this one comes out and every year the results are reported as if it's news. Or rather as if it's new. new news. whatever. 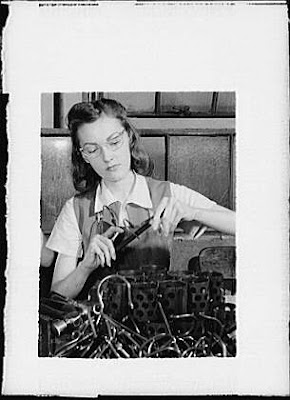 Yes. Women make less money than men. Even when they have the same experience and do the same job. The dismal science, economics, says that this is impossible outside of blatent discrimination which should only be temporary in a true market economy as wages are set by productivity which blah blah blah.

I hate economics. Turning instead to my everpresent compangion, anthropology, we learn that a major factor in setting wages is the perceived social standing of the job and the people who tend to do it. Women as a group have a lower social standing than men in this country so they will get paid less even if they're doing the same thing. In general, you get paid what you're worth in a social sense as much as you do in an economic sense. You can copy and paste that idea to apply to race and age.

I'm not saying it's right. Just don't expect it to change when people refuse to admit that it even exists. For example, Fark.com tagged this news as unlikely.

Backtracking a bit, I wouldn't put too much stock in the study sited in Reuters article alone since it comes from a private organization that hasn't published it's findings in a journal of any kind and direct access to the study is not freely available. But, there's plenty of other sources that have gotten the same results. The best compliation of theory, evidence, and discussion can be found at echidne of the snakes. This should be required reading for anyone with a high school education.

(The Picture is by Ann Rosener via American Memory. The caption with the photo reads: Women in war. Machine gun production. With swift, deft movements, this young worker, one of 2,000 women employed in a Midwest war plant, assembles barrel carriers of machine guns. It's a job requiring constant attention, speed and judgement; a job for which women have proven themselves better fitted than men. Site: a Midwest plant.)
Written by the unbeatable kid