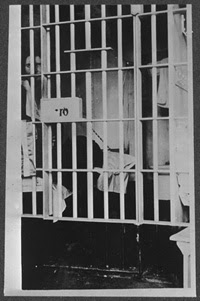 From this month's Harper's index:

So, half of those we call criminals today were called mental patients in the 50's. The other possible interpretation is that crime is way up in exact proportion to the amount insanity is way down. Seems unlikely. I discussed these numbers a few months ago with my mom and she thought that the numbers indicate that we are using jails as proxies for mental institutions. There is probably some of that going on but as a whole that explanation feels incomplete.

(The photo is from Women of Protest: Photographs from the Records of the National Woman's Party, Library of Congress)

diggs must be tired from all that working and studying.